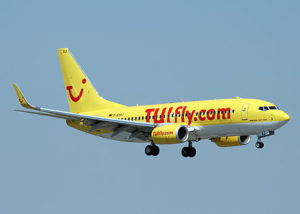 Belgian airline TUI Fly (former Jetairfly) is opening 330 new vacancies in its aircrew team in preparation for the summer season.
The airline is looking to hire 70 pilots and 260 cabin crew, because the airline plans to add new destinations.
TUI Fly will also increase the frequency of flights to cities it currently serves. Cabin crew will be hired on temporary contracts running until the end of October.
‚ÄúWe don‚Äôt need as many people in the winter. That‚Äôs typical for the sector,‚ÄĚ a company spokesperson said. ‚ÄúBut we hope to be able to keep on board those who make an impression.‚ÄĚ The new cabin staff will undergo eight weeks‚Äô training, with the possibility of a language course.
TUI Fly operates out of all five Belgian airports ‚Äď Brussels, Ostend, Antwerp, Li√®ge and Charleroi ‚Äď with a fleet of 25 planes and, after the new appointments, a staff of 1,150.