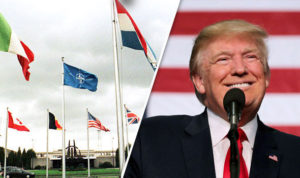 The White House has confirmed that US President Donald Trump will meet with the North Atlantic Treaty Organisation heads of state in Brussels on 25 May.
The date of the summit and Trump’s plans to meet with Nato secretary general Jens Stoltenberg on 12 April in Washington was announced by Nato on Tuesday.
“The president looks forward to meeting his Nato counterparts,вЂќ said the US presidentвЂ™s press secretary Sean Spicer in a statement.
вЂњTo reaffirm our strong commitment to Nato and to discuss issues critical to the alliance, especially allied responsibility-sharing and NatoвЂ™s role in the fight against terrorism.вЂќ
During his campaign, Trump was critical of Nato, calling it вЂњobsoleteвЂќ. He also referred to Brussels as a “hellhole” following the terror attacks of 22 March, 2016.
According to news agency The Associated Press, the visit to Brussels marks Trump’s first foreign trip. His vice president Mike Pence already visited Belgium on 19 February.